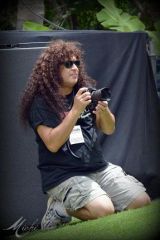 - How did your career as a photographer start ?

Right out of High SchoolâŠ Some friends dragged my to a concert and I never stopping take pix of bands sinceâŠ We formed a fanzine (Metal Rendezvous Int. 1981-1989... 100,000 issues world wide base out of Monterey CA.) and it grew into a major mag!!!

There is really not much differenceâŠ I have done a lot of scenic shots, portraits, produce shotsâŠ Shooting bands live on stage, you have to know or anticipate what the band movement will be likeâŠ Angus rarely stops moving so you have to watch for his runs across the stage and get in the right spot to catch him!

- When did you first discover AC/DC ? Was it like love at first sight/hear ?

That would be 1976 or 77âŠ One of my best friends back in High School was a big fanâŠ I think it was "Let There Be Rock"âŠ I went out and bought" Powerage" when it came out!! Yeah AC/DC was very different from all the bands at the timeâŠ way more grunt and guts!!! Bon Scott had something that no one else had!!!

- What does AC/DC represent for you as a photographer ?

At first when I was young, before I was proâŠ it was like HECK YEAHâŠ AC/DC!!! As the 80's went on I had more respect for the band and felt lucky that they let me in the "photo pit" !! 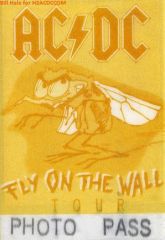 - Over which period of time have you regularly shot them? Tell us more about this show and yours souvenirs.

I shot the band from 1979 to 1988 I thinkâŠ All in and around the San Francisco Bay AreaâŠ I have photos and backstage passes that's about itâŠ Had some Highway to Hell T-shirts but they got lost !!!!

- You have seen the band on stage with Bon Scott? Did you meet him? If so, tell us more about the man...

Yeah, I was 18 and just out of High schoolâŠ My buddies and me saw the band in Santa Cruz CA. This was my 2nd or third concert that I ever photographedâŠ (not professionally) The band was all that and more!! Bon was rough, with that look in his eye!!! He was Rock & Roll !!! Wish I had got to meet him or at least shake the Man's hand !!!

Never got to really meet the bandâŠ A few "What's up" but never got to hangâŠ Come to think about it, they rarely gave interviewsâŠ And we interviewed EVERYONE back thenâŠ

- There's always something special out of the AC/DC pictures. Power, energy, rage. How would you explain that ? How did you capture this energy ?

Because AC/DC is a real Rock and Roll Band!!! The band gives 110% on stage. I just got lucky at first. When you walk into an AC/DC concert you know what you are going to get. You know all the words to all the songs and you sing them at the top of your lungs, even when I was clicking away in the photo pit, I was singing all the songs. That's it, the band and their fans coming together and a good photograph will capture the spirit!!! 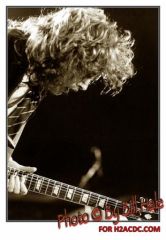 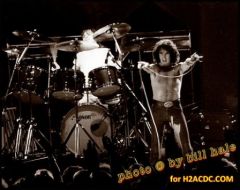 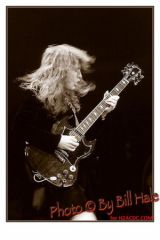 - What did AC/DC bring to the Rock'n'roll on-going history ?

Why yes I am !!! Top 3 and in no orderâŠ Highway To Hell - Powerage and Back in Black!!! I do fancy Ballbreaker thoâŠ Mainly for the production valueâŠ The band hit a stride in the late 70's!!!

- What did you think about the choice of Brian Johnson in 1980?

Ya knowâŠ He was the right choice!!! Thinking backâŠ there was no one else that could fill that spot on stage and Bon once told Angus of him...

I saw most tours up to 1989âŠ I stopped shooting live for a bitâŠ And the band has not gigged here in Hawaii so... 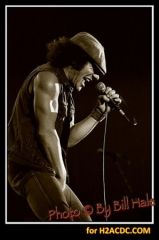 - What was your most memorable photo shoot and why ?

Every time that I shot AC/DC was specialâŠ You have to be on your game as Angus doesn't stand stil l!!!

I am compiling my rock shots and putting them out in book formâŠ So far I have two, a Metallica and MegadethâŠ

Megadeth: Another Time, A Different Place.. (Foreword by Dave Mustaine)

AC/DC is... One of the best bands that ever graced a Rock and Roll stage!!!

- Do you have a message for http://www.highwaytoacdc.com and its members ?

Yes, Keep rocking and TURN IT UP!!!

Cheers for the interview, Pierre!!! Keep it Heavy ~ Make it METAL Bill 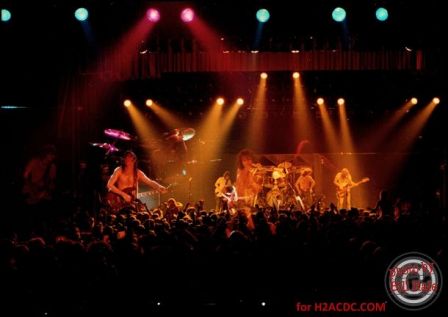