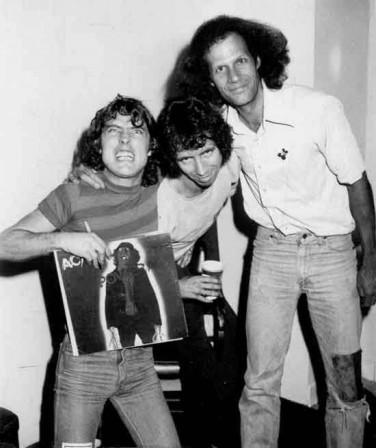 I love the Australian group, AC/DC. They have a corny name, harmonically they are nothing spectacular, all their songs are derivative and sound the same. But when High Voltage, their first American LP, hit the station, I couldnât pry it off the turntable. Wonderful open roaring energy in the grooves and non-stop bone-biting fun-loving rockânâroll on the stage. They have a sense of humor, which is quite unusual in the deadly, sexy Heavy Metal world. I interviewed the sin-loving lead singer, Bon Scott (who died recently, probably of too much fun), and the frantic boyish lead guitarist, Angus Young, shortly after the release of their album Powerage. I believe, at the time of the interview, I was the only DJ in town playing their music.

My friend, Debbie Katz, and I waited backstage in the Buffalo Memorial Auditorium while Aerosmith pounded in the background. Bon and Angus came out, their hair still wet from the showers. They were personable and eager to talk.

Gary: Why didnât you drop your pants tonight?

Angus: I used to.

G: You used to. But you donât anymore?

A: All American audiences get insulted by it, eh.
G: Oh, really? Do the promoters, did the promoters tell you not to?

A: Ahh! No oneâs ever told me not to. Itâs just, itâs just that a lot of American audiences seem to be turned off it, think youâre insultinâ âem.

B: No, theyâre not perverted like the English, yâknow. The English are all perverted. Th-they-the English get off on seeing little schoolboysâ asses. Aerosmith was so loud that I sometimes had trouble deciphering their Australian accents through the din. Bon Scott began making suggestive glances at my friend Debbie.

G: Now, um . . . one thing Iâve noticed â again, Iâve read a lot about you guys and Iâve listened to your records a lot â one thing Iâve noticed and it always surprises me, that it, ah, is that a lot of re-, American reviews of your records and your concerts are not very favorable. What do you think of that, that you donât get very good reviews in this country?

A: Thatâs all, thatâs all that matters, right. 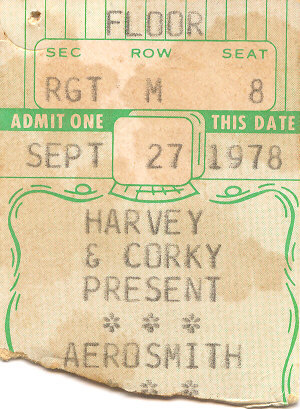 B: Reviewers donât count, they-do-they donât buy records, yâknow, they jus-th-they-jus-they get given them and they, yâknow, give th-their spiel on them, like, um, and the kids, they obviously, you-he-you heard the audience tonight, yâknow the kids love the songs, yâknow.

G: Oh, they were standing.

A: Like, I mean, in England, theyâve still got critics still criticizing the Beatles, yâknow, yâknow.

G: Do you think youâve had it worse in America from the critics?

A: I never read them anyhow, hahaha.

G: No, they, itâs not good to read them, they really arenât very, ah, reliable. How many shows do you do each year?

B: Yeah, eight or nine months. Weâve got gigs five or six a week

D: How long have you been doing that?

A: Years. Ever since we first started.

G: Ever since you first started.

D: It shows that youâve worked that much together, âcause youâre so really great!
At one point during the show, Bon carried Angus around the whole floor of the auditorium on his shoulders while the young guitarist wailed on his cordless guitar, whirling through the crowd, spilling streams of sweat. Debbie asked them about it.

D: Whoâs idea was it to go around â do use â you usually go around the auditorium like you? 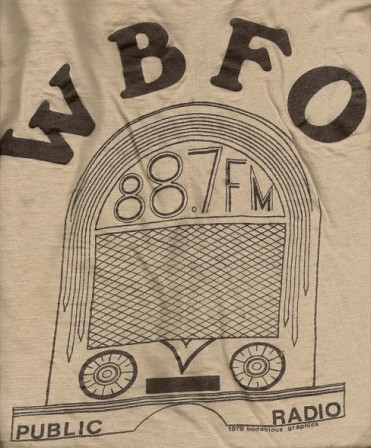 A: I like the feeling of a man underneath me so I jump on his shoulders.

B: (Making muscles and sounding like Popeye.) Iâm glad you think Iâm a man!

D: You carried him all around there, youâre real strong!

A: He gets out there.

Bon Scott was an old time rockânâroller. At the time of this interview, heâd been rocking professionally for 12 years and had never once let his unbelievable energy keep from coming on. If you ever saw him perform, you know it was amazing he lasted as long as he did. Angus Young had adopted the image of a demonic naughty boy. A mere twenty at the time, he seemed absolutely out of his mind and absolutely sure of what he was doing.

G: Now, some of your, some of your songs seem to, like, have interesting stories behind them. Like, um, âSheâs Got Balls.â Is, ah, is that about a real person?

B: I was married once, yâknow. And my wife said to me one night, she said, âHow come you never write songsâ â this was while we were still married, I divorced her â âhow come you ne-never write songs about me?â And so I sat down and I wrote this song âSheâs Got Ballsâ which, yâknow, by being a man show her that I can have â having balls . . . .
.

A: And she divorced him the next week, hahahaha.

B: Well, pretty soon after, yeah.

A: He told me he likes men better. (Inaudible remarks.)

D: Did you have any kids?

G: No kids. She should ask â speak into the microphone. (Snorts). Um, âKicked in the Teethâ, how about that one, does that have a story behind it?

A: Ah, there are a lot of stories that come from generalities, more than yâknow, certain, yâknow, things, ah. Like all, the, all the things we write about, like, ah, Iâm 32 years old so lots of things that happened to me over th-the last 32 years, yâknow, so Iâve got lots of, sort of, therefore, back-un to write about, yâknow, lots of . . . .

G: So youâve been kicked a few times.

We continued talking about some of the songs by AC-DC, as Bon Scottâs admiration for my friend Debbie became more evident.

G: Um. Oh, âWhole Lotta Rosie,â tell me about that one.

B: Nineteen-twelve, yeah. Which is about, what, a hundred and eighty pounds. (Note: actually more like 280 pounds.)

G: From Tazmania, you said?

B: Yeah, yeah, a Tazmanian devil.

After the interview and a few autographs, Bon invited us up to the hotel for the party. Debbie didnât feel like it, so we left. She said she thought they were probably gay. I donât know, I said, he sure seemed to dig you. 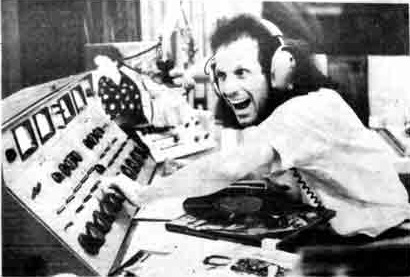